Medwyn Williams – eleven times Gold medal winner at the Chelsea Flower Show, President of the National Vegetable Society and a member of the Fruit and Vegetable Committee of the Royal Horticultural Society.

A prospective gardener couldn’t have wished to be born in a more aptly named little hamlet, Paradwys (Paradise in Welsh) I don’t remember much about the place though as I was only there for a year before moving to another little hamlet a few miles away called Llangristiolus and to a very old Welsh cottage called Llwyn Ysgaw (Elder Bush). The house dated back to the 17 th century and it was in this garden that my father, a farm worker, gave me my very first lesson in growing vegetables at the tender age of eight years old.

He was a very wise man as he had already forked over about a square yard piece of his plot to a fine tilth. Also prepared were three short shallow drill in the soil and he gave me three packets of seed, Radish Mustard and Cress. He was very wise because the three varieties were very quick to germinate thereby keeping the attention of an eight year old boy focused. They were also very quick to germinate and within six weeks I had invited my friend Gareth over for a salad sandwich consisting of, yes, you’ve got it, Radish Mustard and Cress with lashings of Salad Cream! 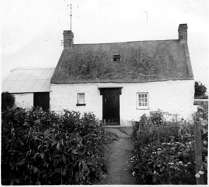 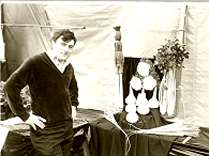 From that day on I was hooked on growing vegetables and used to go with my father all over the Isle of Anglesey helping him to stage his prize winning vegetables. In those days my father was known for his long carrots and was particularly proud when other exhibitors used to shout ‘here comes the long carrot man’ when he walked into the marquee. There is nothing like a marquee to hold a flower show in, the smell of freshly mown grass under canvas and the smell of the flowers and veggies have remained with me to this day.

I was in my late twenties when I had a go at staging a collection of six kinds of vegetables in the Novice class at the Anglesey County Show in 1969, forty years ago. I actually managed to win my first ever Red Card at that time, It was just a co incidence that I happened to have been the only one that entered! It was after I joined the National Vegetable Society at the Shrewsbury Flower Show in the late 60’s that things started to really motor. Meeting other growers and exchanging ideas was a boon to me and before long I competed at most of the National Vegetable Society Championships.

In the meantime, my father and I staged collections of Vegetables annually at our local Agricultural show on the island winning the elusive Red card on every occasion. 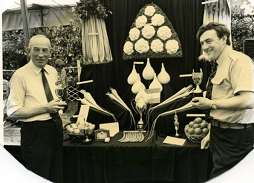 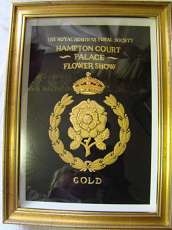 The next stepping stone towards Chelsea beckoned when I was invited by the Chief Executive of the Royal Welsh Show to stage a 15ft exhibit there. We carried on doing this for 6 years winning a large Gold Medal on each occasion as well as the best exhibit. During this time I had a dream of competing at the Chelsea Flower Show and this became a reality when I was asked to stage my first RHS exhibit at Hampton Court. The fact is that you have to prove to the RHS that you are worthy of staging an exhibit in keeping with the most prestigious show on earth. We won a Gold medal on our first attempt as well as a cut glass vase for the best new competitor to Hampton Court. The icing on the cake however was being awarded the much valued Tudor Rose Award which is presented annually to the RHS by the Guild of embroiderers at Hampton Court Palace for the best display at Hampton Court.

Having served my apprenticeship, so to speak, the door was now open to exhibit at Chelsea. However, I had one major problem to overcome, I didn’t have sufficient space at home to fulfil my dream of staging August/September quality vegetables towards the end of May. Fortunately the University of Wales at Bangor came to my rescue and I was able to rent some bench space at their research establishment at Penyffridd, Bangor.

I managed to win 10 consecutive Gold medals at Chelsea, an accomplishment that had never been done before with vegetables. I have also won the President’s Award at Chelsea for the best display chosen only by the President himself. I have nine Gordon Lennox Trophies for the best vegetable of the year as well as two Lawrence medals for the Best Horticultural display of the year. Only one Lawrence medal is awarded annually and once you have won it, you are not in consideration afterwards for a period of three years. After three years I again won the Lawrence medal, effectively in succession. My last display was in 2005 and this I considered to be the best of them all.

However, I have been tempted back to Chelsea one more time to stage another display with my son Alwyn and my Grandson Owain. If things turn out to plan, It will be fantastic to have three generations at Chelsea in 2010, I shall keep you posted.

Dedicated to the keen vegetable gardener.